In the winter of 2015, my husband and I went to Manali on a short trip. We started off with two days in Delhi, another two in Shimla and then four days in Manali, Himachal Pradesh. This particular trip is memorable simply due to the number epic fails we encountered 🙂 I’m going to tell you about one of those incidents today.

Related Post: Read about another incredible travel experience in Paris in this article.

The drive from Shimla to Manali took slightly longer than we had expected due to some stops along the way. We stopped at a rabbit farm for some time and then at Kulu to buy some shawls. So by the time we reached Manali, it was sundown.

Our hotel had been pre-booked and our driver began searching for its location. Unfortunately, it was nowhere in sight. I tried calling the front desk of the hotel but there was no answer so we started asking around.

Much to our dismay and horror, one of the locals said such a hotel doesn’t exist at all! My anxiety and panic mode instantly turned on. However, after a few attempts, someone directed us towards a long narrow path that led upwards.

Nothing had prepared us for this ride. The path was almost inclined at a 45-degree angle. We hung on to the door handles for dear life as the engine literally gasped for breath while dragging us to the top. We reached a clearing and then saw a long flight of a hundred steps leading to our hotel.

Lugging our suitcases we made our way to the top. The hotel looked like it had been newly constructed. We made our way to the rooms, the wooden stairs and floorboards creaking beneath us. Everything was fine, except for the fact that it was located in the middle of nowhere.

Okay, now comes the fun part. You see during the day I try not to believe in ghosts. But after sunset, I get a lot more open-minded 🙂 It was pretty cold and we requested for a room heater. The fellow who got it to the room left it there with a few disclaimers that greatly spoilt the peace of my mind.

While I was trying to recover from that shock, he drops another bomb. The entire staff moves out of the hotel and goes someplace else for the night and comes back in the morning again. With that, he just left. My jaw remained open for a few minutes afterward.

I so wanted to know why these people do not stay in the hotel at night. My husband kept telling me to calm my nerves and that it was nothing to be worried about. But I just couldn’t stay calm.

Those two vital pieces of information that the kind man had shared, kept nagging at me. Finally around 11 pm, unable to take it anymore, I convinced my husband to look for another place to stay.

We woke up the driver and again drove down that narrow, steep path hanging on for dear life. We must’ve checked at least 10 other hotels in the vicinity, but unfortunately, couldn’t find a single vacant room! I was terrified of having to spend the night in our hotel. Even spending the night in the car seemed like a better idea to me. I know I’m weird that way.

Finally, we found a hotel but the staff told us that the room would be available only in the morning. So much for the death-defying drive up and down!

As you can imagine, with no other option we did spend the night in the hotel that we had originally booked. And no, nothing extraordinary happened at night 😉

In the morning, before we vacated the room, my husband told me to check out the balcony once. Something that he’d dared me to do the night before, but I had flatly refused. And there stood before me a gorgeous view! A peek of the lofty Himalayas through the valleys of Manali. 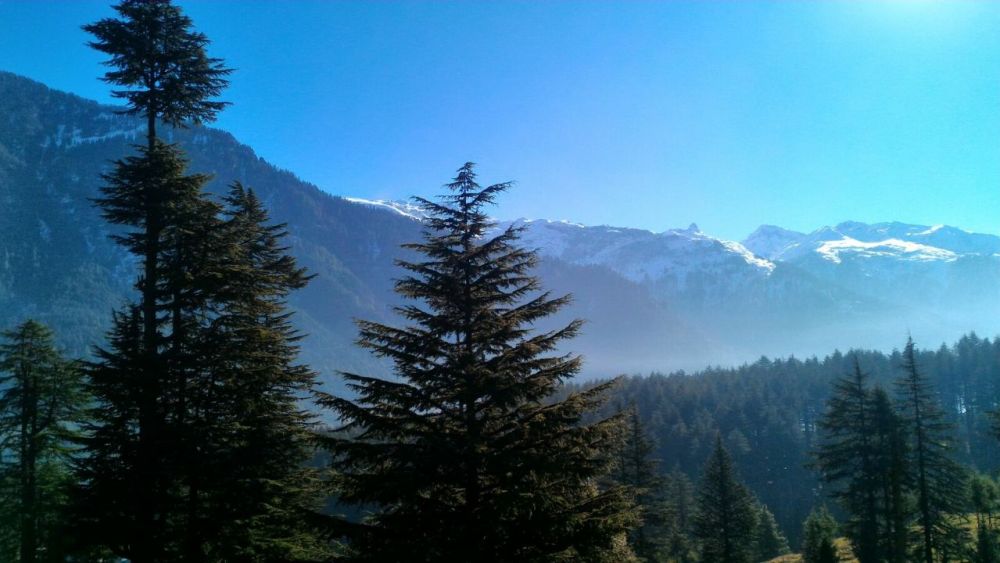 Chandrima is a passionate traveler who loves to inspire others to travel. She has traveled to 15 countries and more than 50 cities and shares her personal experiences and other useful tips on her blog "Travel Stories Untold". View all posts by Chandrima